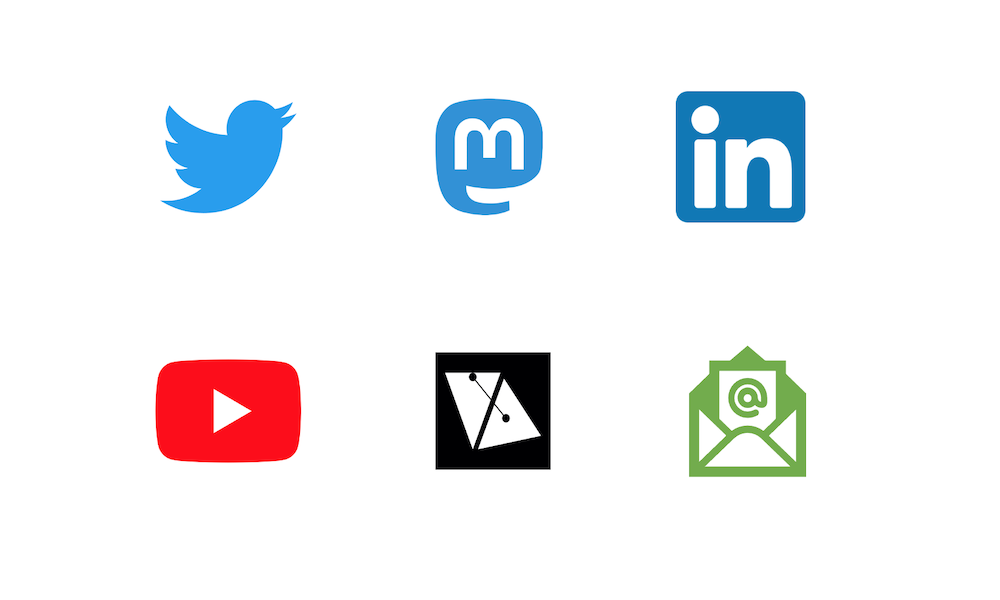 Looking around, I didn't think there were quite enough reflective pieces about Twitter and announcements about future publishing plans, so I thought I should write mine...

The turbulence caused by the galaxy-brained Flamethrower-in-chief looks like it will have permanently damaged the data visualisation Twitter community. Some in the community had already left Twitter, long before the mass firings and weird demands for pledges of allegiance that led to loads of Twitter staff quitting. These latest developments now seem to be jeopardising its survival on a technical basis, rather than just a principled one.

I've been on Twitter, and quite active with it, since April 2010, with my primary existence being through my 'business' account in the form of @visualisingdata. This has proven to have been an absolutely vital tool in helping me to gain a profile, find an audience to publish posts or announcements, and make invaluable contacts/friends. It has enabled me to curate different streams of brilliant people to discover their latest thinking and output in this field. While large swathes of Twitter turned particularly horrible around 2015 onwards, the data vis corner of this vast pool always stayed a civil and friendly place and I'll miss it terribly.

On a more personal basis, outside of data visualisation, Twitter has given me access to some brilliant thinkers, to some incredibly funny people, to a relentless source of the very latest news, and lots and lots and lots of football content. Whether Twitter ultimately shuts down or not, M*sk has disrupted things to such an unrecoverable extent that is has alerted me of the need to reflect on how I will continue to find ways to engage with people in this field, reach people outside it, and generally publish content going forward:

Twitter - The first thing to acknowledge is that I'm continuing with my two Twitter accounts - @visualisingdata and @Explore_Explain - for as long as it is relevant to do so and/or technically possible to do so.

Mastodon - Like many others in the data visualisation space I've got a Mastodon account on the vis.social instance - vis.social/@andykirk - and there are growing numbers of the Twitter diaspora popping up on there. It is a different experience with a rather scholarly and calm vibe. A bit like being in a pleasant library where you quietly browse through different content sources and where its ok to talk but do try to keep the volume down where possible. It isn't a Twitter replacement, just a different way to interact with people and share stuff. For now I'll probably cross-post on both Twitter and Mastodon, though I'll probably try to be less informal on Mastodon.

LinkedIn - I was quite sceptical about the scope of LinkedIn as an alternative possible social network, as it felt like it was just a marketplace for recruiting or being recruited, or for proudly announcing how you've been appointed to be the office kitchen milk monitor. I relented in 2020 (joining LinkedIn, not being milk boy) and belatedly set up a profile on there and I must say it has been a really valuable platform. Indeed, over the past 2 years I've had loads more engagement on there than on Twitter, despite having many thousands fewer followers. I should really give this place a bit more attention going forward.

YouTube - For my podcast/video series you can keep on top of new episode releases in many places, as summarised here. Although all episodes are released in audio format, the most care and attention publishing wise does go on the video versions so the @explore_explain YouTube channel would be the primary platform to follow.

VisualisingData.com - What have I missed? Oh yes, my own site and specifically my own blogging. It's fair to say I have dried up somewhat on the blogging front. It's less to do with not having things to say and more to do with the saying of those things taking place elsewhere, often in micro format like Tweets. I'd like to think that Twitter's decline/demise will represent a good time and reason to start posting, with series like #LittleVis especially demanding to be given a further run. In January 2023 I'm going to be belatedly launching a brand new, freshly designed, more mobile-friendly version of this site and, with that, it would seem to offer a good juncture to resume more frequent blogging again.

Newsletter - I'm not yet at the Newsletter stage but they do seem reasonably popular and one of the most practical 'push-format' options, so I might consider setting one up as a way to force me to focus on creating content worthy of including in it.