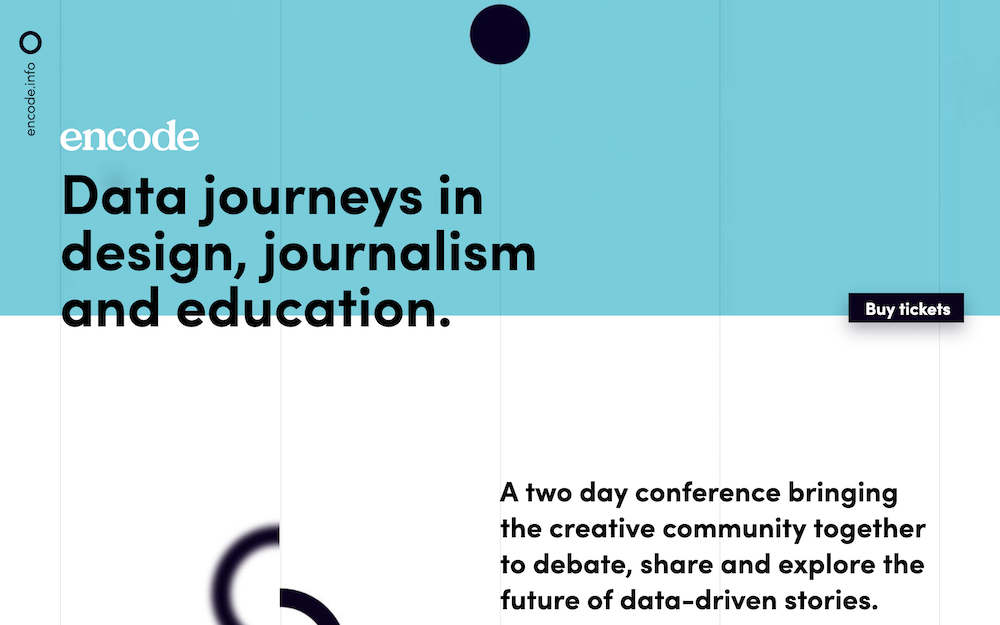 OFFER TO FUND A PLACE AT ENCODE CONFERENCE
By Andy Kirk | July 31, 2019 | Announcements

The Encode conference is taking place in London on 19th and 20th September. As I previously posted, this is a brand new two-day conference that aims to 'bring the creative community together to debate, share and explore the future of data-driven stories'.

I know from speaking with the organisers, that one of the key aims of this conference is diversity, in both the representation of speakers and attendees as well as the topics being discussed. I'm fortunate to be both a speaker and attendee but my only positive contribution towards diversity is to be a Yorkshireman with green eyes, which doesn't really count. I therefore want to try contribute, in a small way, to widening access to this event, inspired by a gesture made by Rasagy Sharma.

If you know of anyone potentially interested in attending from a typically-under-represented community in data visualisation, and/or perhaps somebody who doesn't have the means to justify the outlay to attend a conference event, let me know via email and I’ll fund the registration costs for one attendee. If I receive multiple suggestions I’ll do a random pick, rather than make a subjective judgment of who 'deserves it most', which is not for me to determine.

I'll collate suggestions up to and including Wednesday 31st July and then the person attending has plenty of time to make arrangements.

(ps. I tweeted about this two-days ago and have not received any suggestions yet, so if you're hesitating because you think there might too many others coming forward, don't!)

** UPDATE ** I received multiple requests/suggestions for who could attend the conference and so, to fairly determine who received the funded ticket, I did a random draw to select a name. I used a highly non-technical method based on writing all names on post-it notes, screwing them up and then shuffling them about in an empty cup. The first name that I drew from the cup, and the person who receives the free ticket is Éléonore Mayola.

I also decided that I wanted to make a further smaller gesture to two more people to whom I will send a copy of my new book when it is published. The second name drawn was Denis Owor and the third name was Andrea Barry.