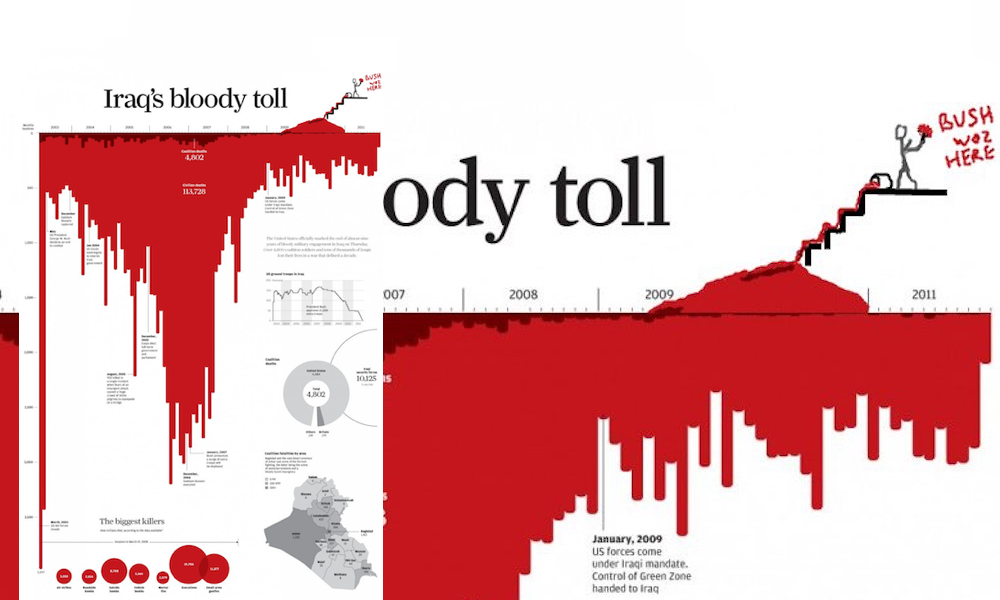 A couple of weeks ago I launched a small contest inviting folks to send me examples of graphiti - the clever ways can you think of combining the world of doodling and visualisation. The winner would receive a free copy of my upcoming book as soon as it is published. The contest closed on Sunday and I've now had chance to judge the entries.

Picking a winner was inevitably hard with lots of excellent submissions. I reduced the list down to a core group of finalists from which I eventually selected Chris Love's graphiti treatment of the 'Iraq Bloody Toll' graphic which particularly appealed to me due to the similarities in concept with Slinkachu's 'Little People in the City' work, that I mentioned in my launch post. Congratulations Chris!

A huge thank you to everyone else who entered a piece, there were several other submissions that came especially close in the final reckoning, I loved them all for different reasons but ultimately there has to be a winner. A special mention too for Nisa Mara for her excellent artwork. Keep you the great (legal) graphiti work!

.@visualisingdata will come up with something hand drawn later, but for now #graphiti pic.twitter.com/xE36CxqEm8

Hey @visualisingdata, a nice slide here. Oh, you should have pay attention in your French class btw ;-) #graphiti pic.twitter.com/6qqgKt9UEg

@visualisingdata #graphiti turning a drink stain into something random pic.twitter.com/oS0xr95qOd