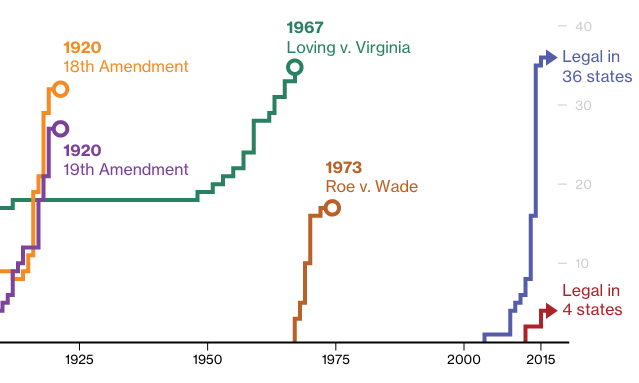 Really like this piece of visual journalism by Alex Tribou and Keith Collins of the Bloomberg Visual Team who have looked at 'How Fast America Changes Its Mind' over some of the biggest social issues. Given the imminent possibility that the Supreme Court will consider arguments for an extension of the right for same-sex couples to marry nationwide, what is the history of pace of change across other significant issues: interracial marriage, prohibition, women’s suffrage, abortion, same-sex marriage, and recreational marijuana.

The first piece of analysis is a short animated display that maps the number of states that had removed a ban (or, for Prohibition, enacted the ban) since 1781 for each of the 6 big issues. You can see the very different rates of progress between, for example, the rights regarding interracial and same-sex marriage. In 3 (and possibly 4) of the 6 issues there seems to be a tipping point when around two-thirds of states are accepting of positive social change.

Below this you have an individual breakdown for each of the 6 issues tracking in more detail the individual stories state by state. 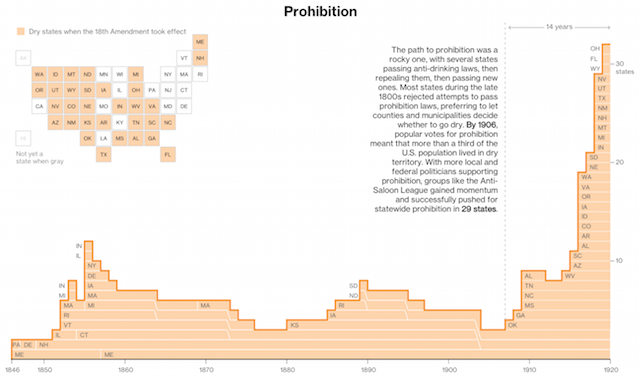 Finally, there is an alternative view which considers the speed of federal action following a major trigger point brought an issue to what I imagine was a mainstream, nationwide consciousness.

This work follows (in some part) a similar analytical narrative approach to a piece of work I previously profiled, namely the Peyton Manning touchdown pass record published by The Upshot. That begins with a similar overview across history showing cumulative change over time for the subject categories (in that case Quarterbacks). It then explores the individual stories for significant 'categories' (previous record holders) before finally considering an alternative perspective based on setting everyone's starting point at the same zero to compare the rate of change (in their touchdown passing totals).