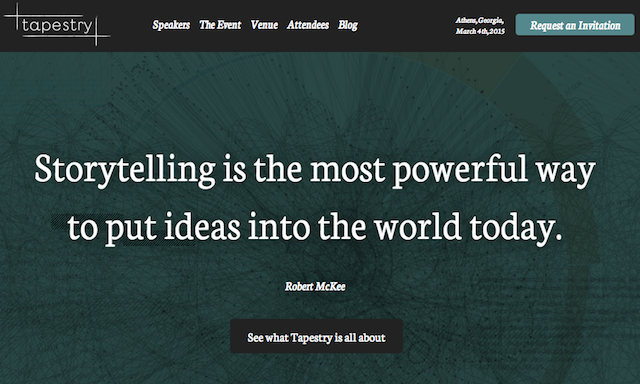 They (human people) say the key to comedy is timing. Well timing is also a key factor with regards to blogging, certainly when covering particular subjects. So a write-up of Tapestry Conference 2014, which took place almost a week ago, is already tiptoeing sheepishly outside the 'news cycle'. It feels especially redundant when others have already done a great job (Francis and Emily) of thoroughly covering the talks/main themes and double-especially redundant when the quality of my note-taking during the event must be declared unfit for purpose.

Great line from @albertocairo. I'll tweet what it was when somebody writes it down on another tweet! #tapestryconf — Andy Kirk (@visualisingdata) February 26, 2014

So nobody captured that great line from Alberto and I've forgotten it word for word (it needs to be). I'm a terrible conference reporter. — Andy Kirk (@visualisingdata) February 26, 2014

Rather than go through the talks with a forensic kit and capture ever key takeaway, I'm just going to whack a few comments out into the open using the gift that is the bullet pointed list. I want to try to express the event's value on the data visualisation conference calendar and why you should definitely try to get to the next event in 2015.

4 responses to “A short reflection about Tapestry Conference”