THE DATA JOURNALISM HANDBOOK IS NOW LIVE
By Andy Kirk | April 29, 2012 | Fieldnews
The Data Journalism Handbook is a free, open-source reference for anyone interested in the field of data journalism. It features contributions from over 70 of the leading global voices of authority and has now been released, remarkably only 6 months after its conception. It is a joint initiative between the European Journalism Centre and the Open Knowledge Foundation and is published by O'Reilly Media. 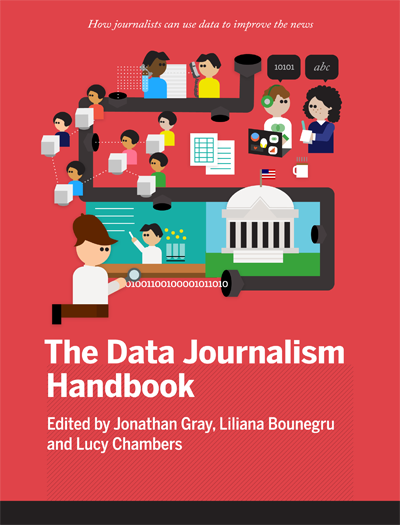 The Handbook's list of contributors reads like a who's who of the major names in this field, such as the New York Times, Zeit Online, the BBC and the Guardian, but the additional impressive aspect is that it is an entirely open source reference:

The Handbook is an open educational resource, under a creative commons licence (CC-BY-SA) so please share it with your friends and remix it. We hope that it will encourage many budding data journalists to look at data as a source and give them courage to tackle it, as well as showcasing some great examples of journalism using data as inspiration for future stories.

In terms of contents, after its introduction, the book covers life in the newsroom, a series of data journalism case studies, and then three chapters dedicated to the challenges of data: getting it, understanding it and delivering it. For those of us with a specific data visualisation slant, it is the last chapter which has most direct relevance and these are the sections covered within: A free web version of the book can be viewed here. Alternatively, if you wish to pay for an e- or print version from O'Reilly Media, you can pre-order now and just wait a few more weeks for it. Many congratulations to the project coordinators Liliana and Lucy who have worked incredibly hard, alongside others too many to list, to get this project across the finishing line. It looks like a super resource and I'll be sure to take a good read through as soon as the opportunity arises!

4 responses to “The Data Journalism Handbook is now live”