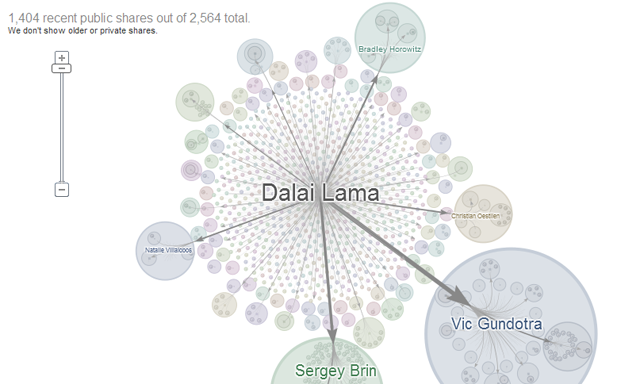 After what appears to be have been a rapid and widespread take-up of its Google+ social media service, Google has now launched details of its 'Ripples' feature. Significantly, news of the release was made by Fernanda Viegas, one of the most prominent names in the field and co-leader, with Martin Wattenberg, of Google's "Big Picture" data visualization group. (Update: the Ripples development team also included Jack Hebert).

The visualisation plots a network diagram to display how a post spreads as users re-share it on Google+. The direction of the sharing activity is indicated through arrows. Clustered circles show the spread of the original post within and amongst each subsequent user's own circle of friends and followers.

A great feature is the timeline device which allows you to watch the post grow organically from its originator and spread over time, with new clusters of users' sharing activity emerging to demonstrate the speed and popularity of the post. The visualisation comes with complete interactivity, enabling you to pan and zoom within the network and explore the 'journey' of the post in close-up. Summary details at the bottom draw out the headline statistics of key influencers, describe the post's 'chain length' and plot the proportion of different user languages via a rather ineffective pie chart.

You can see more in the YouTube video below: