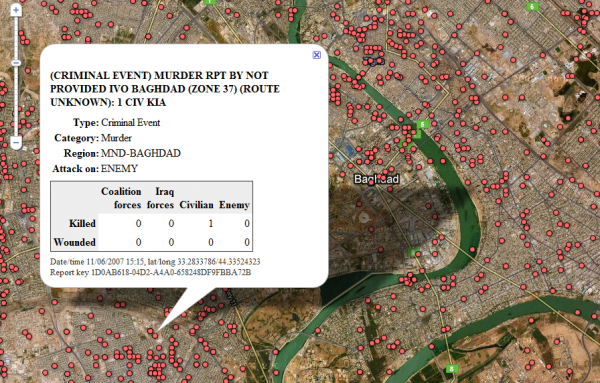 In the past hour, WikiLeaks (Twitter feed) has released the largest classified military leak in history. The release contains 391,832 reports documenting the Iraq conflict from 1st January 2004 to 31st December 2009 (except for May 2004 and March 2009). The release has been coordinated through many of the most prominent media outlets across the globe including The Guardian, The New York Times, Der Spiegel, Le Monde, Channel 4 (UK), Al Jazeera, The Bureau of Investigative Journalism and Swedish TV channel SVT.

Keep your eye out for updates on this site as I track this story as it develops over the coming days. In the meantime here are some of the early releases of visualisation material associated with this story:

Al Jazeera has a number of visualisation outputs, having had 10 weeks to immerse themselves in the data. The first below shows an interactive map showing the timeline of violence, plotting 65,000 roadside bombs and thousands of checkpoint shootings.

This second collection has a series of graphs showing details of deaths, casualties and other key events.

Le Monde has produced an interactive which allows you to reveal/hide different incident category series.

The Guardian has chosen to plot a unique picture of every death in Iraq mapped using Google Fusion tables. Unlike with the Afghanistan war logs data, they have chosen not to release the entire dataset as they cannot be confident at this stage that all sensitive data has been removed.

They have also created an interactive timeline revealing the logs associated with a particular day during the Iraq conflict.

The Swedish TV channel has published on its site a stacked bar chart showing the different types of deaths.

Der Spiegel has produced an interactive timeline which plots selected events on a map interface. This is accompanied by a historical timeline chart which plots the deaths and woundings in the context of key historical milestones.

Channel 4 has produced an infographic on its website which draws attention to some of the most impactive elements of the secret war files.