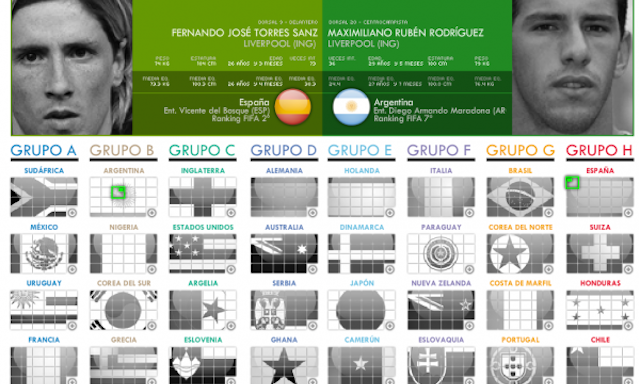 Over the past couple of years we have experienced a number of key world events and stories that have triggered vast amounts of data and information outputs - the US elections, the financial crisis, Haiti earthquake, UK elections and the Iceland volcano are just a few that spring to mind.

The latest 'data' event is the football World Cup 2010 which kicks off in South Africa in a few hours from now. To mark the start of the tournament I have been trawling the web to unearth examples of the variety of information products and devices news and media outlets, sponsors and visual artists have created to engage and help supporters learn more about the tournament. Some are good, some are bad and some, naturally, are ugly. I don't have enough minutes in the day to provide narrative or constructive comments for each visualisation so I'll let you be the judges.

Typically, the examples I have discovered fall in to these categories:

Because the games clearly haven't started yet there is nothing that captures results or key stats but I'll be tracking these developments during the tournament to discover the most innovative displays and designs.

GUIDE TO THE VENUES AND STADIUMS

Expresso of Portugal providing a country by country guide

La Informacion - Random facts about the World Cup down the years

Some odd business involving Hyundai donating 1,000,000 balls to Africa - a ball being donated every time someone buys a car... or registers on the site (why the parity?).

And finally, the fashion garment that all the kids are wearing right now... a belt that lets you stick in the scorelines into the buckle.

[I must acknowledge a similar article posted on InspiredMag by Tiago Veloso which (frustratingly!) I came across towards the end of compiling this post. It contains some other great illustrations as well as many of the above.]