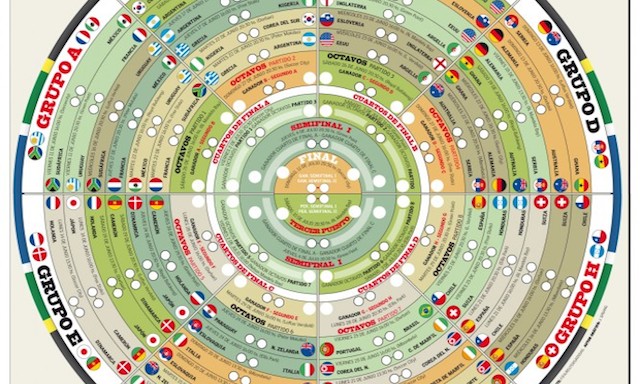 Following the popularity of the Visualising the World Cup 2010 post I published last week, here is something of a sequel presenting a whole host of further examples. Many thanks to all who submitted comments, tweets and sent me emails with suggested links to some of the items displayed below. The visualisations and information devices I have presented here fall in to the following categories:

Match schedule and tournament infographic published in superdeporte, via newspagedesigner

World Cup Infographic from the Rockford Register Star (via www.visualeditors.com)

...including the animated goal replays

The Guardian datablog presents analysis of England's passing accuracy along with a free data download of Opta's complete match data/statistics from the England vs USA game.

Detailed visualisations and statistics from the TotalFootball2010 iPhone app

Interactive graph from lainformacion.com which presents Spain as the likely winners based on a complex algorithm

GUIDE TO THE VENUES AND STADIUMS

Special guide to the South Africa venues published in Superdeporte, via newspagedesigner

Beautiful illustration and infographic of some of the key aspects of the World Cup, by golden section graphics

Map of qualifying countries via chartsbin

Complex but elegant visualisation which reveals the countries each player in the tournament plays their club football, from Estadao

A stylish interactive profile of some of the important players at the tournament, by El Mundo

Infographic about the historical performance of brazil in World Cups, an example of the work of Fabio Nada

Interactive infographic detailing the much talked about Vuvuzela by lainformacion

World Cup technology milestones down the years from Gizmodo

Bit of a stretch in visualisation terms, but this is an animated representation of the England vs. USA game